“Shane got me some great tickets,”  Ducky’s eyes almost brimmed with tears, she was so excited.

“I’ll call him back, and tell him never mind.”

Summertime is time to follow professional basketball.  Isn’t basketball over?  You say.  Oh contraire; The WNBA is in full swing.  Ducky loves watching the games on TV.  At least once a year, a group of family and friends gets together for dinner and a Chicago Sky Game.  This year, I’m determined to be a more active fan.  I am watching the games, too.  And we are going to more than one game.

I’m not much of a sports fan.  I have a hard time attending to the games.  I find my mind wandering in much the same way as listening to classical music frees my imagination.

So as I sit there watching the Chicago Sky and the Indiana Fever play fantastic basketball, I think about what a great guy Shane Cleghorn is to foster a fan like Ducky how different the experience is from The Bulls, and I pondered the changes shaped by Title IX. 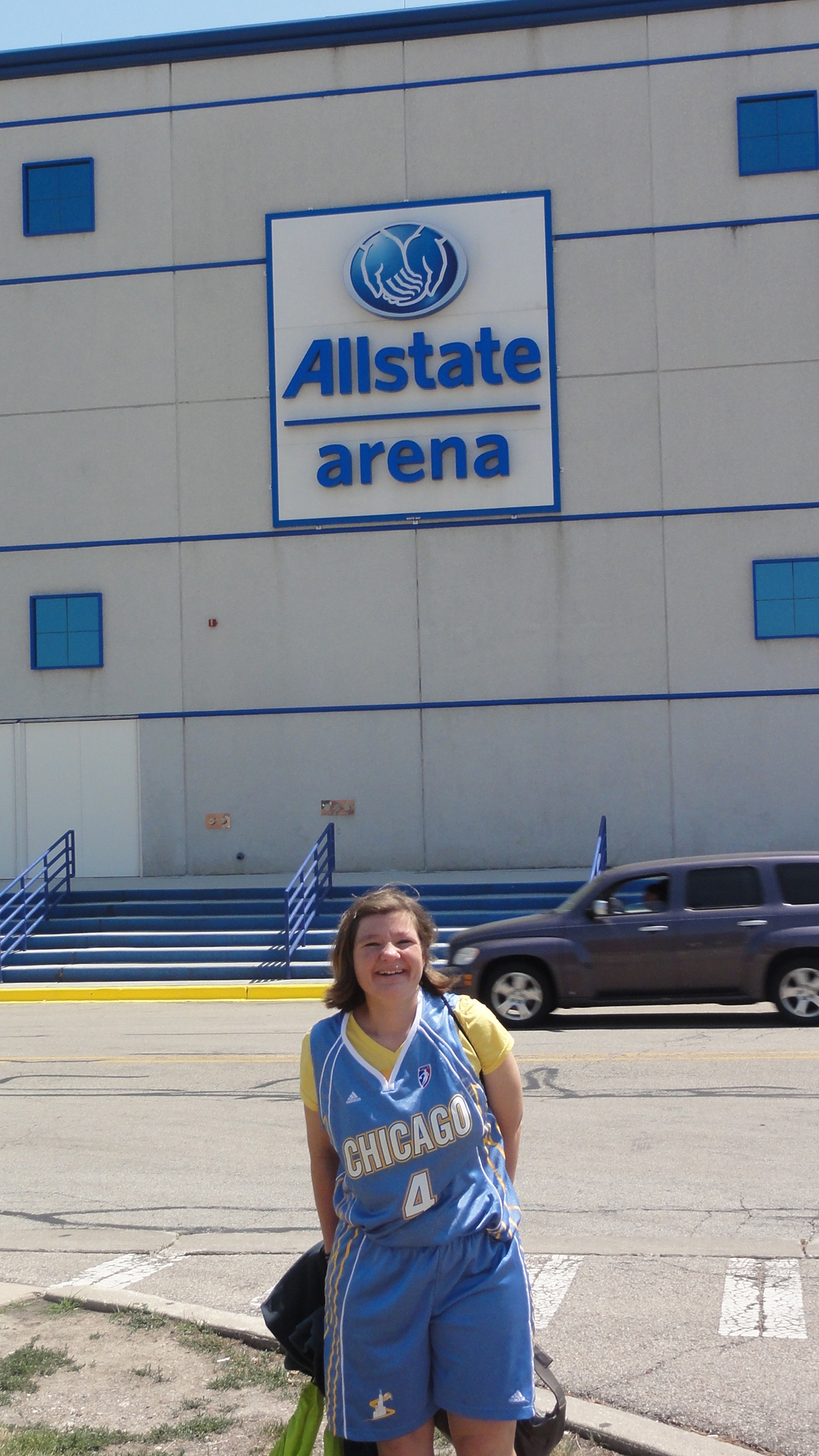 Ducky put on her Sky “away” shorts and jersey and I don a blue tank top – fan apparel.  Ducky explains on ride to the Allstate Arena that Epiphanny Prince broke her foot, so it was going to be a tough game.  She reviewed last year’s program to get me up to speed on the players’ names.  Shane owed Coral a T-shirt from a last year’s birthday outing.  I know just how many times she’s called him, because she re-caps each message left a minimum of three times, ending with, “Does that sound good?”  Shane is just as cheerful and encouraging every time he calls back.

Ducky shows me  “home” jersey she really wants.  Oh my goodness, it’s $120, a fortune for a young woman who works 20 hours a week as a courtesy clerk (grocery-bagger/cart-corraler) at the local grocery store.

Our seats are right at center court, the front row.  I call Loved-one to tell him we got Bill Murray’s seats.  Well, almost.  We might be closer.  Whoa, Ducky really did get a good deal.  Thank you Shane. 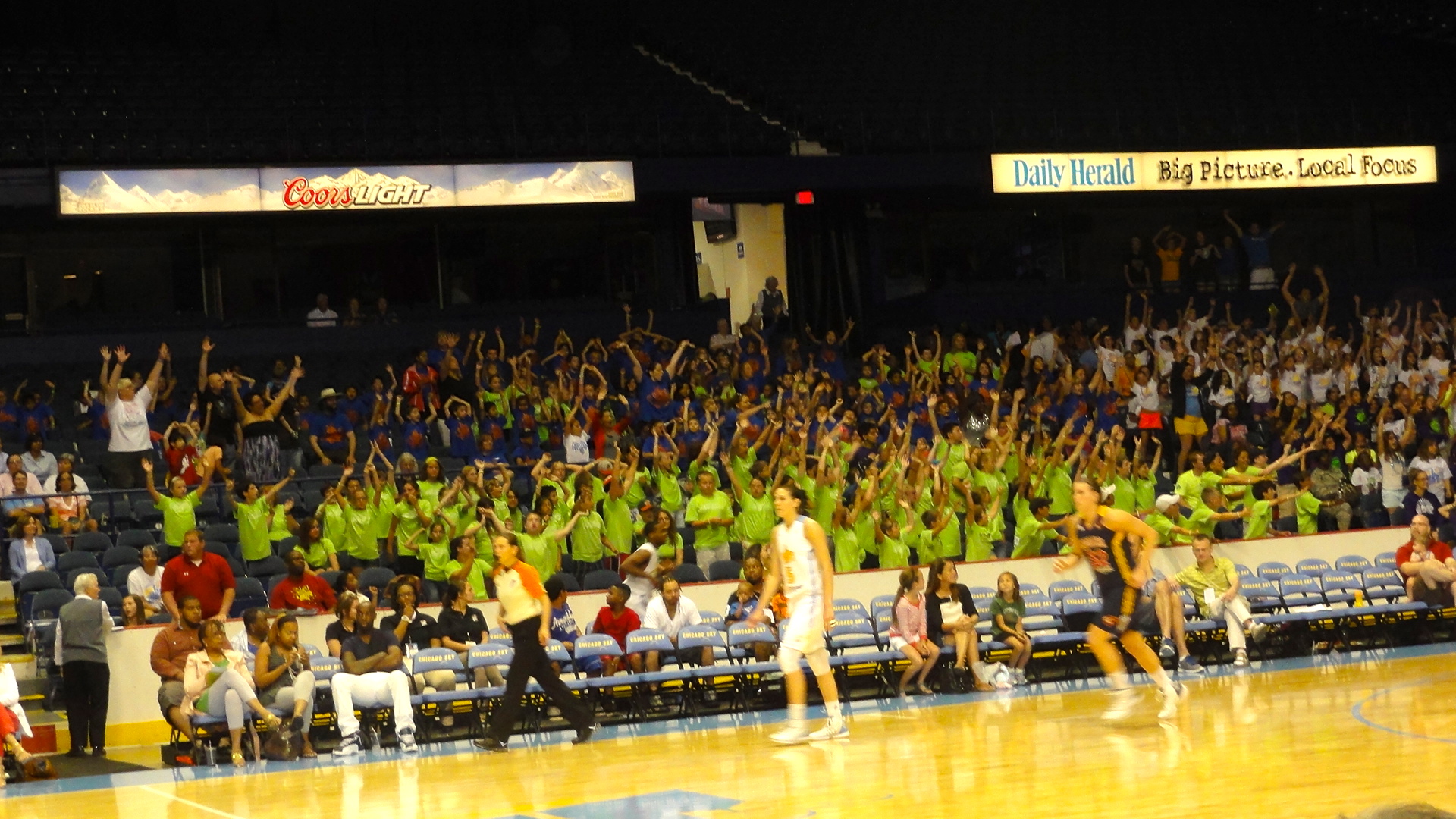 I count over a dozen summer camp groups, all in various colored shirts, to set them apart from everyone else.  The fans are just as enthusiastic as any Bulls fans, and they don’t even need alcohol to get them going.  The Sky game had everything I expect from pro-sports:  great athletic competition, enthusiastic fans, entertaining half-time entertainment (who can beat Seniors doing the Boot Scoot Boogy), and a gaggle of male gymnasts sinking baskets from a trampoline.

“Get your hands up in the air,” Ducky shouts when Sky fall behind and Fever’s Briann January sinks her third three-pointer.  Sky held a slight edge at half-time.  Cynthia Fowles sure looks strong to me.  Ducky says she’s called Big Stills. 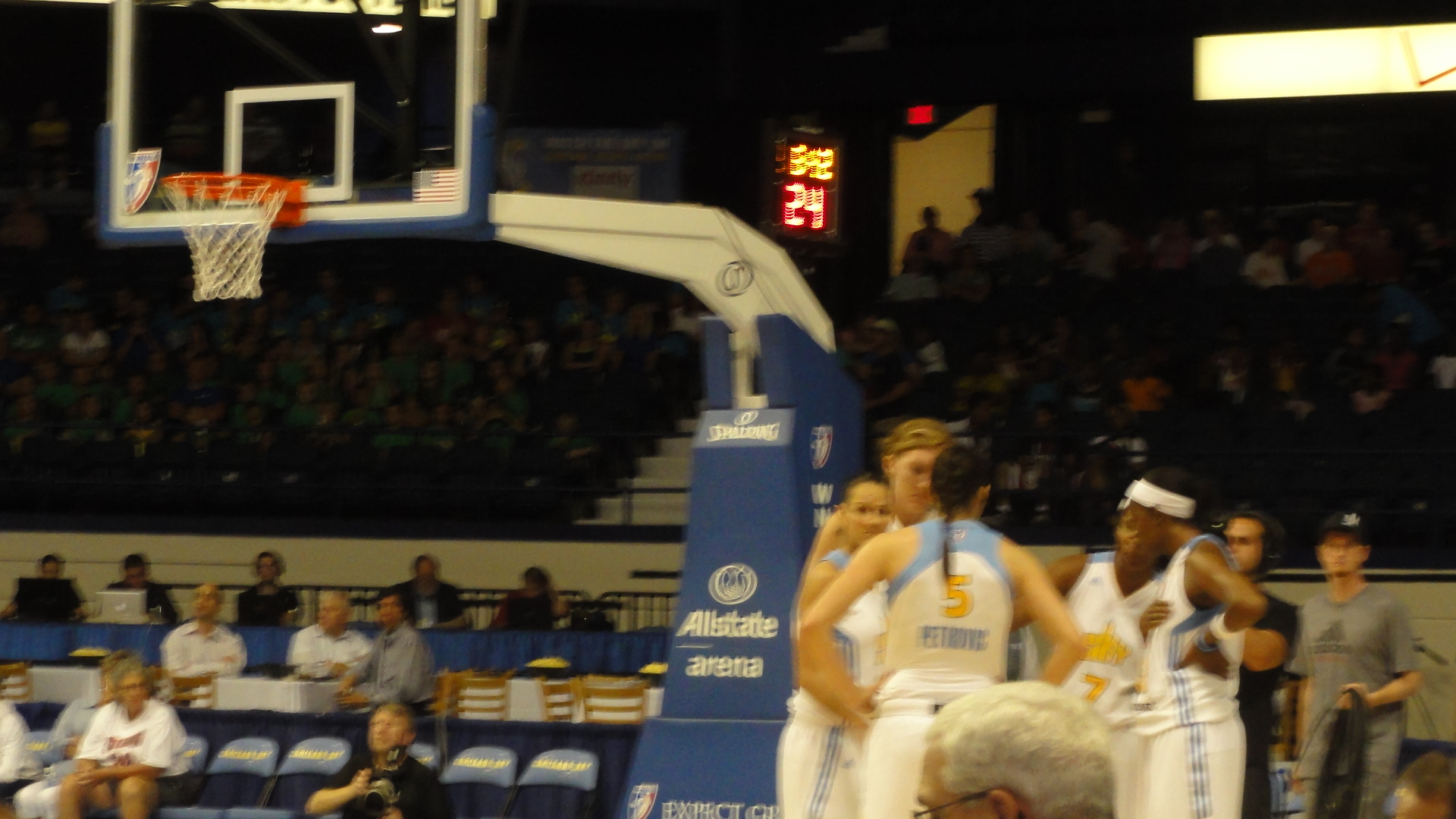 I fail to understand Fowles’s nickname.  “I hear what you’re saying,” I say.

Somewhere during the second half, we fell behind by eleven and never quite regained our footing.  With 51 seconds to go, January was benched, but it was too late.  Drat!  Shane shows up with Ducky’s T-shirt and an added bonus:  a bright yellow Sky cinch-bag.  Oh Shane, I consider you part of the family now. 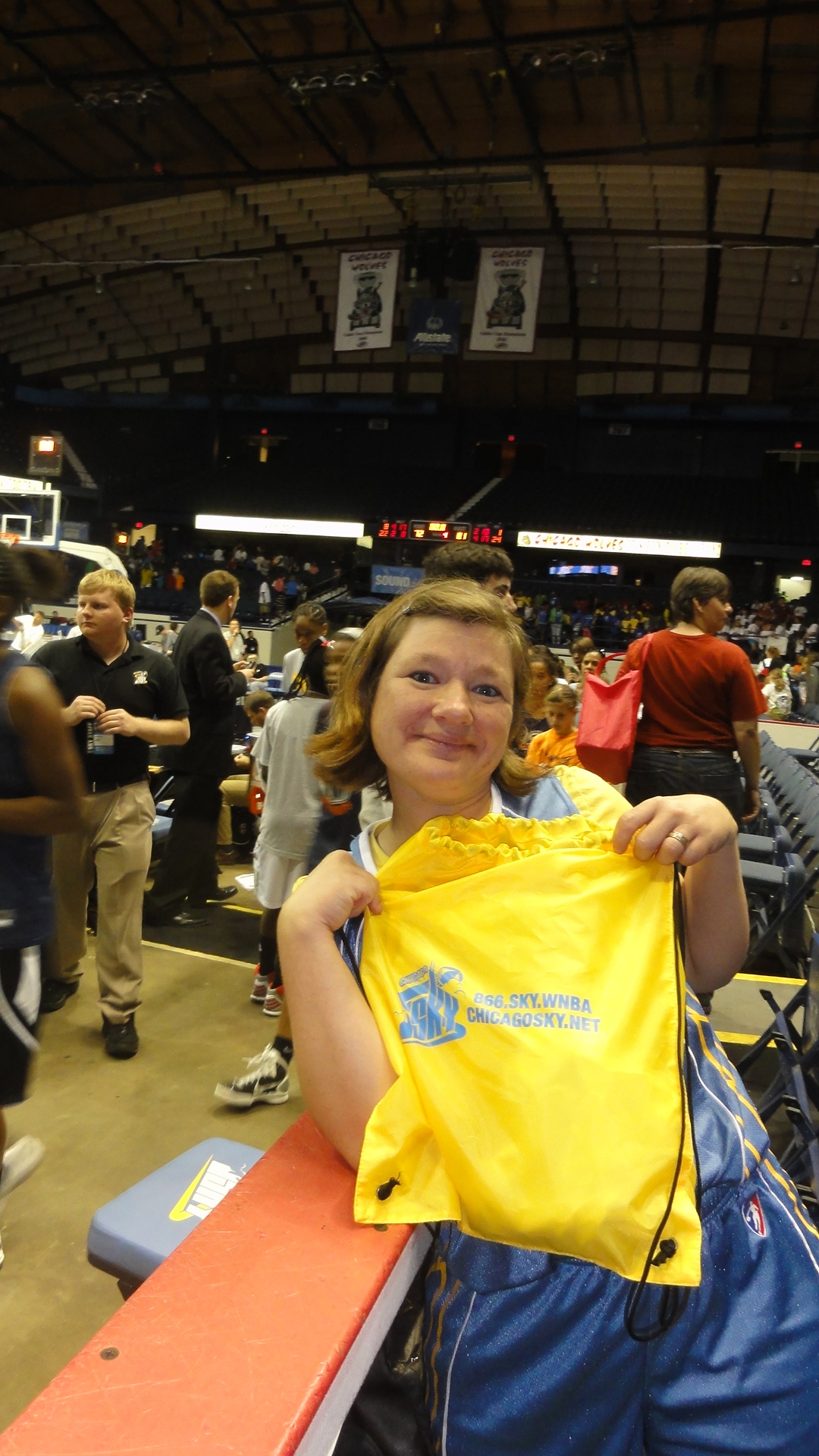 My sister, Deanna, played basketball in high school.  Back then, only two girls on the team were allowed to travel the entire court.  That much running was bad for girls.  Perhaps our uteri would fall out if we ran the whole court.  Only two girls could be Rovers.  A girl that fit, probably would never use her uterus anyway.  Right.

I never played basketball.  To tell the truth, I still marvel at how anyone can dribble the ball and run at the same time, while watching what their team-mates and at the same time keep track of what the opposition is doing.  Loved-one taught me to do a pick-and-roll back when we dated.  He encouraged me with comments like, “You have a lot a natural athletic talent.”  That may be true, but it’s surely more in the cheerleader, yoga, bicycling, gymnastic area.  Athletics that require balance and flexibility, not eye-hand coördination and a ball, not to mention more than 5’3” of height, Muggsy Bogues aside.

Ducky won the free-throw contest in Junior High.  She played basketball for two years for Special Olympics.  Ducky is a scrappy player, but she’s only 4’10”, so she rarely got the ball.  Still, she l-o-v-e, loves basketball, and I love her.

Special Olympics was born in 1968, due to the efforts of Eunice Kennedy Shriver; Title IX started in 1972.  Ducky and her sister, Bunny, benefit from both.

All my kids are very athletic.  As one of Bunny’s friends pointed out, “You all have legs like Popeye’s.”  Besides the obvious funding to take part in sports, girls get the opportunity to compete, gain stronger self-esteem and confidence.  Scholarships for athletic ability, coupled with academic achievement, allows many girls to succeed at college.

After the game, we stick around to get an autograph and pictures with Courtney Vandersloot.  That nevvver happens at a Bull’s game.

The game started at 11:30, so we had lunch at the stadium.  Pizza and a Coke was less than $10.  We had a little change left over for the Dairy Queen on the way home.  What a great way to end the day. 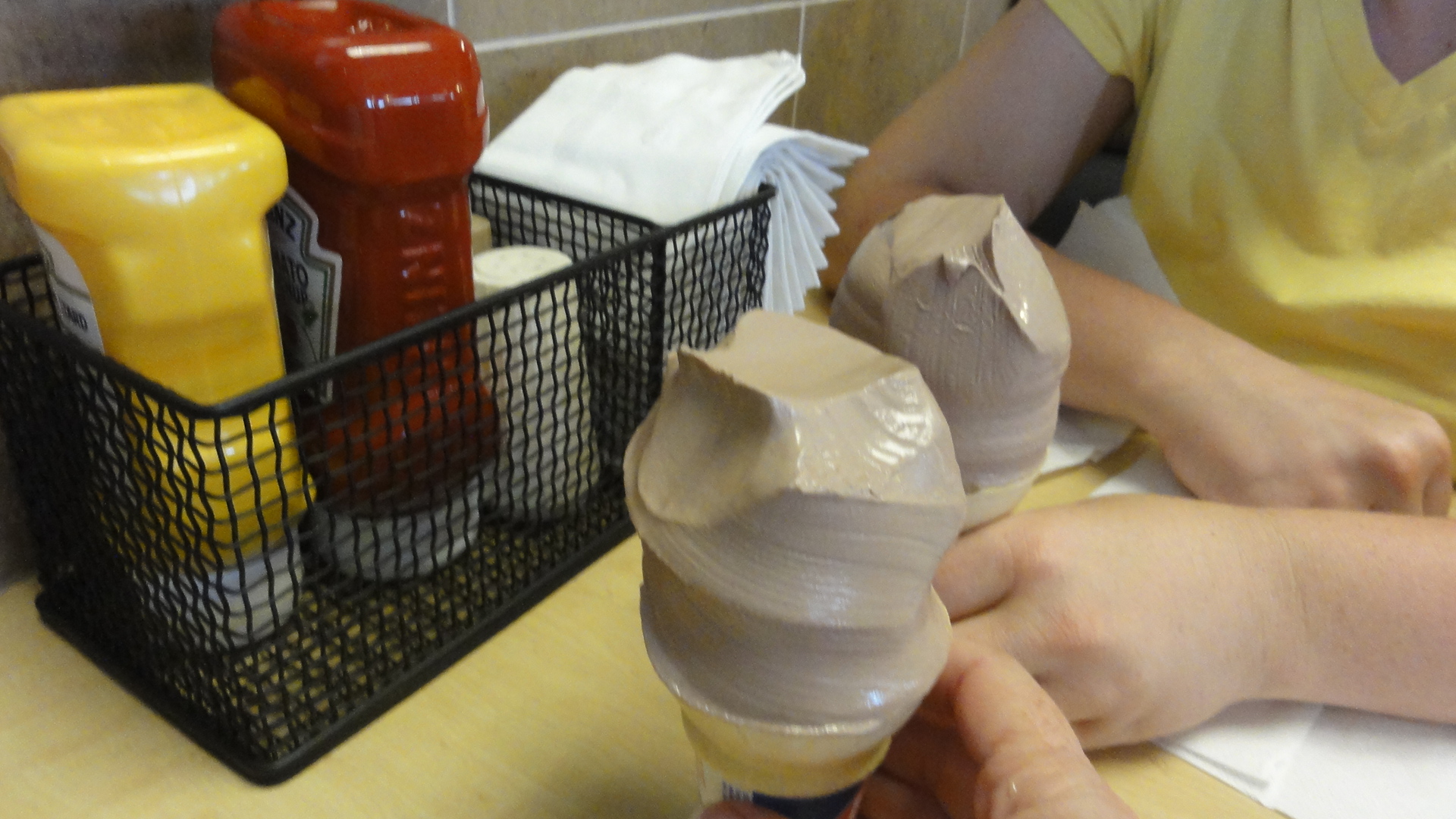