People seem to love it or hate it; or so I’m told.  But I say, don’t give rhubarb a raspberry, give it a try.

Summertime is a time when almost everyone thinks of simpler days gone by.  For me, that includes remembering the wonders of rhubarb.  As children, my sisters and I loved to rip a piece out of the ground and just chew on it raw.  No harm there.  An established rhubarb plant can take the tugging, and there’s a good dose of nutrition inside.   Raw rhubarb is a great source of Vitamin C, Vitamin K, Calcium, Potassium, Magnesium, and Manganese, as well as chock full of dietary fiber.
Want to introduce some nostalgia into a summertime picnic?  Hilda’s rhubarb crunch is from the 1970s, and still gaining compliments.

Hilda is a farmer’s wife in Bad Axe, Michigan.  She turned 83 this year, and her rhubarb patch is still going strong.  My family lived on the farm in the ‘70s and helped Ed, Hilda’s husband, work the farm in exchange for living in their “little house.”  Every spring we harvested what seems like bushels of rhubarb from behind the hen houses.  We washed rhubarb, cut it into ¼ inch pieces and threw it into Ziplock® bags, then right into the freezer.  We also made plenty of rhubarb jams and served up Hilda’s Rhubarb Crunch, especially good hot out of the oven with a little vanilla ice cream.

We operated on a reduced carbon footprint before the term was coined.  During the infancy of the environmental movement, we grew locally.  Even the sugar was locally grown and processed from sugar beets. 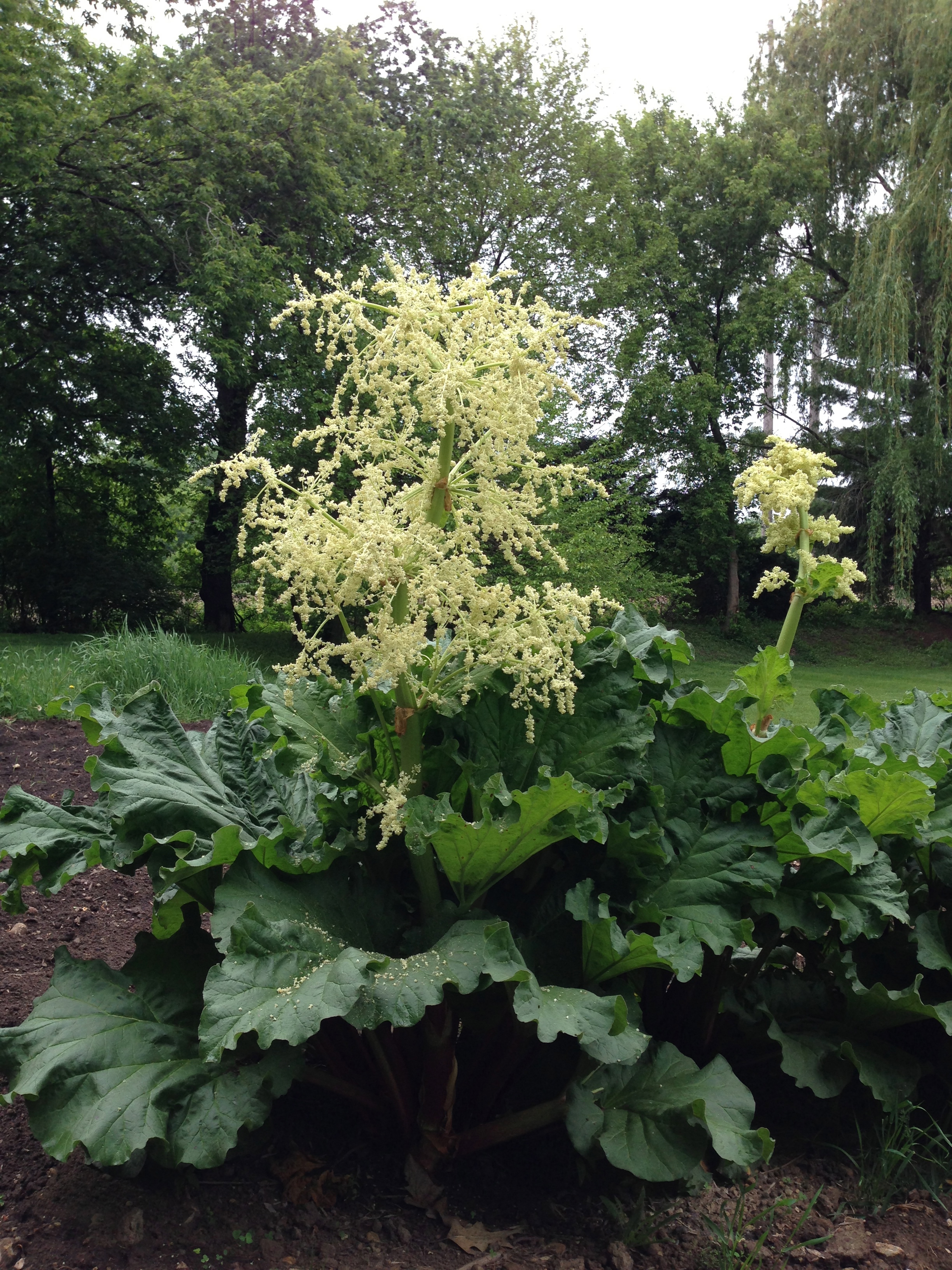 Growing rhubarb does not require a farm.  It can be grown as a nice accent plant for your flower garden.  The stalks are a pretty deep red, and the broad leaves are a deep, hunters’ green.  Besides, look at the beautiful flowers when the plant “goes to seed.”  Fantastic!

Rhubarb does like lots of sun, so companion plant with other sun-loving flowers.  Put it on the edge of the garden; there will be no need to uproot and re-plant for at least 20 years.

Rhubarb takes little care, as long as it’s grown in well-drained soil. That said, it does take some time to get a harvest.  Plant from a root in the early Spring.  Till up the soil and make sure to keep the plants fertilized.  Don’t harvest any rhubarb after the first year of growth.  After two years, harvest a few finger size stalks, but leave most of the stalks to aid in good root development.  The third year, any finger size stalks may be harvested.  Each year the plant will produce more and more harvest-ready stalks.  It took me four years to get enough rhubarb for Hilda’s Rhubarb Crunch from one plant. Now I have enough to give away.
Hilda’s Rhubarb Crunch

As with almost everything, rhubarb crunch is best with ice cream and good company.

(No need to waste energy by preheating, just increase the baking time.)