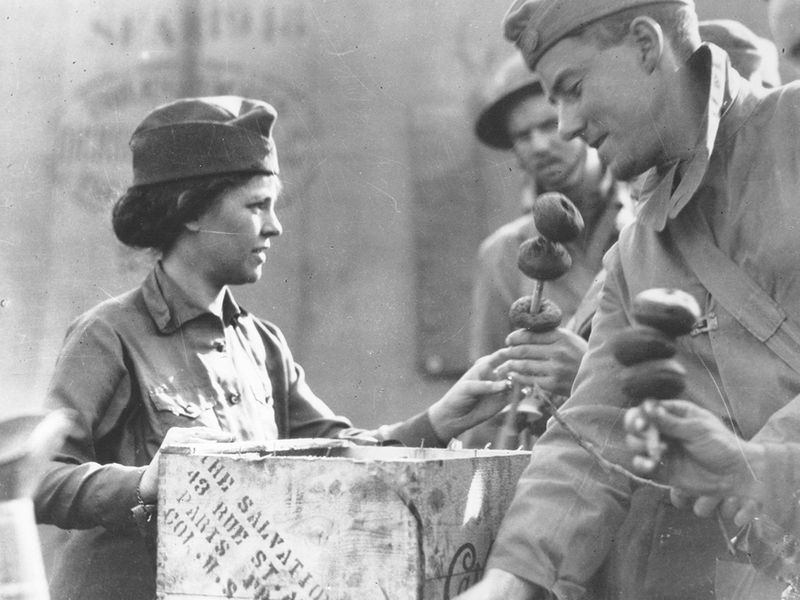 A sister historical fiction writer lamented that she researches for hours just to get a meal right. I’ve heard experts say just write the story, and don’t let the research get in the way; that’s work for the second draft.

Although I can go down a rabbit hole with research, I can’t imagine spending hours and hours in straight research. At the same time, getting details correct, stops me in my “story” tracks.

Some time ago I heard a piece on our local public radio station about Doughnut Dolls during WWII. The piece was a new, fascinating tidbit of information, right down to the old spelling of doughnut (not the familiar “donut.”) The image of Doughnut Dolls, dressed prim and proper, almost like business women rolling carts to the troops stationed at the front stuck with me.

Doughnut Dolls must be in my next novel.

As you can imagine, Doughnut Dolls didn’t particularly like their nickname. They were members of the Salvation Army, doing their part to support the War efforts with good wholesome fun.

With a little research, I found Doughnut Lassies began their mobile canteen work during WWI. Dressed in skirts and hosiery, these women ventured to the front lines to give soldiers a taste of home. I suppose some troops called them “Dolls.” “Lassies” sounds like a British term to me.

Armed with not much more than a .45 handgun and a helmet, these women used empty wine bottles or shell casings for rolling pins and empty condensed milk cans for doughnut cutters. The original Doughnut Dolls fried up the doughnut in a helmet filled with hot lard.

..a 20-year-old woman named Stella Young, recounted her time … when firing was so intense that the Salvation Army supply wagons couldn’t reach them. At one point a piece of shrapnel ripped through their tent and tore through a donut pan just when she’d stepped away from the stove for another ingredient, Young told the Daily Boston Globe years later.

By WWII, the Doughnut Girls had a little more protection with a mobile canteen.

One thing is certain, my characters will develop a new appreciation for the bravery of women.

My favorite part of writing is the new things I learn.

Interested in making Doughnuts (not donuts?) Here’s the recipe the Dolls used:

Combine all ingredients (except for lard) to make dough.
Thoroughly knead dough, roll smooth, and cut into rings that are less than 1/4 inch thick. (When finding items to cut out donut circles, be creative. Donut Dolls used whatever they could find, from baking powder cans to coffee percolator tubes.)
Drop the rings into the lard, making sure the fat is hot enough to brown the donuts gradually. Turn the donuts slowly several times.
When browned, remove donuts and allow excess fat to drip off.
Dust with powdered sugar. Let cool and enjoy.

Let me know how they taste.