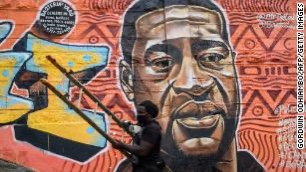 “George turned to me and said, ‘I want to touch the world,’” said Jonathan Veal, 45, recalling the aspiration of one of the young men — a tall, gregarious star athlete named George Floyd whom he had met in the school cafeteria on the first day of sixth grade. To their 17-year-old minds, touching the world maybe meant the N.B.A. or the N.F.L.

George’s death promises to ignite the Black Lives Matter movement more than anything that’s come before. It isn’t new. But it’s different.

Like most of us, I’m appalled at the murder of George Floyd. Like many of us, I walked in a local demonstration for Black Lives Matter.

Yesterday, I watched part of the funeral.

“Let’s listen in,” says the news commentator as a family member breaks down in the arms of Reverend Al Sharpton.

My heart cried for the family.

Mourning is such a private process. I wonder how the family and friends of George can handle day after day of the spotlight. How do they maintain the grace and dignity during such a heart-wrenching time?

I saw a video by Candace Owens. A young black woman explaining why George Floyd is not a hero to her. “The Matthews Fam” critiques her self-proclaimed rant.

I don’t care whether George Floyd is a hero or just a regular man trying to do the best for his family and friends. A boy with dreams, grown into a man in a world of reality.

The individuals who knew and loved George Floyd, and are now mourning his loss, are acting heroically.

Like so many black families that go through a loss like this, the Floyd family wears dignity as a clock.

I stop my television voyeurism; hit the off button. I have no right to invade their sorrow.

And, I feel their sorrow. I doubt I could be as gracious.

I want to bar the door for them. Allow them to huddle in their veil of tears. Sob in the arms each other’s love. I want the cloak of grace and dignity to drop like scales from the eyes of the blind.

I want this to be the beginning of a new day. For all of us.